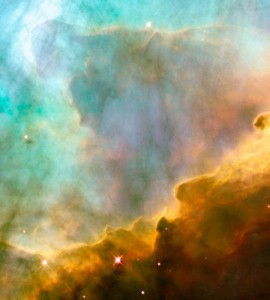 Western science seems to be catching up with ancient wisdom.

The Tao Te Ching was written over 2,500 years ago in China. It is small book of 81 poetic verses offering us a way to live in harmony and peace within ourselves and our world.
Traditional cultures everywhere have highly developed theories of the origins of our planet and humanity. Developed without today’s technology, yet covering ground that science is now beginning to recognize. Imagine the possibilities of collaborating and listening to each perspective!
I hear a similar story from the “Rainbow Gravity” theory of physics described in a Scientific American article, as verse 25 of the Tao Te Ching and the explanation of the Omega Nebula image. Do you?
Rainbow Gravity “What if the universe had no beginning, and time stretched back infinitely without a big bang to start things off?” read the whole article
Twenty-five from the Tao Te Ching
Something mysteriously formed,
Born before heaven and Earth.
In the silence and the void,
Standing alone and unchanging,
Ever present and in motion.
Perhaps it is the mother of ten thousand things.
I do not know its name
Call it Tao.
Photo of the Omega Nebula by the Hubble April 2003    Below is the text explaining the image:
Explanation: Sculpted by stellar winds and radiation, these fantastic, undulating shapes lie within the stellar nursery known as M17, the Omega Nebula, some 5,500 light-years away in the nebula-rich constellation Sagittarius. The lumpy features in the dense cold gas and dust are illuminated by stars off the upper left of the image and may themselves represent sites of future star formation. Colors in the fog of surrounding hotter material indicate M17’s chemical make up. The predominately green glow corresponds to abundant hydrogen, with trace sulfur and oxygen atoms contributing red and blue hues. The picture spans about 3 light-years and was released to celebrate the thirteenth year of the Hubble Space Telescope’s cosmic voyage of exploration.