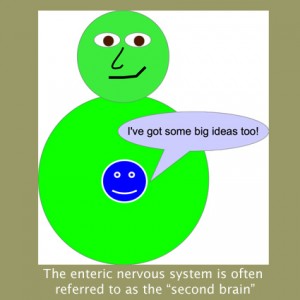 Wondering about the wisdom of your gut feelings?

The Enteric Nervous System (ENS) is a very large group of nerves embedded within our digestive system. Not too much is known about this system, so it doesn’t get much press. But consider this: the ENS contains over 100 million neurons – as many as the spinal cord! And the ENS has all the same neurotransmitters as the brain.